Mary “Missy” Cummings, is one of the first female fighter pilots in the US Navy and now a professor in the Duke University Pratt School of Engineering and the Duke Institute for Brain Sciences. She is the director of Duke’s Humans and Autonomy Laboratory.

She is the role model for the young, both men and women. Men, as she demonstrates what you could achieve through grit and determination and women as she is the perfect role model for breaking the glass ceiling and believing in herself and achieving, what she aspired. She is the one of the US Navy’s first female fighter pilots.

She offers a lesson. In her interview for Mckinsey Global Institute she says “It’s funny to me because being one of the first female fighter pilots, I saw all the problems that come around with being one of a minority that’s trying to break into a majority. There’s a magic percentage of 15 percent. It’s called critical mass. If you can get your minority to 15 percent, they start to make major inroads in the culture of the majority”. So it’s up to all of you to add to the minority and make it 15% to make the difference. Don’t look back. Keep digging till the goal is reached. Keep persevering so that you get what you wish for. Slowly more will do the same and you would have made the difference. Don’t worry, if you are the first. Being first, is lonely at first but pioneering when you would look back at self and wonder, what I did is really worth some while.

Michelle Phan, born to Vietnamese-American parents, studied at the Ringling College of Art and Design and Massachusetts College of Art and Design. A daughter of a single mother, whose father left their family in dire straits, she started working at the age of 17 to supplement the family income. She was working as a nail technician in a salon. It was trying times for her and family. They could barely pay rent, had no furniture, and slept on the floor.

Art was her escape. Then she was accepted at Ringling College of Art and Design. In her first semester at college, she received a MacBook Pros with which she filmed a seven-minute tutorial on “natural makeup”—just her, and the laptop. A week later, it clocked 40,000 Web views. This is the moment that changed her life.

Her YouTube following grew. Soon she was earning as much from advertising revenue as from waiting tables, so she quit the job. Everyone thought she was crazy. In 2012, four years and 200 videos later, her channel was so successful that Google offered her US $1 million to create 20 hours of content. Her real Cinderella moment came when L’Oréal gave her a makeup line of her own. An early YouTube adopters she has uploaded hundreds of videos, millions of subscribers and almost more than a  billion video views. She moved to starting her subscription beauty sampling business, Ipsy, raised $100 million valuing her company at over $500 million.

Here is a role model who came from humble origins, did not allow her limitations to limit her ambition and grew phenomenally on the basis of originality, self-belief and hard work.

The examples of these remarkable women and many more like these ones would inspire you to do better in your lives, not let hurdles become the reason why you won’t go for it and would inspire you to success. I am quite sure that you will find your own Ikigai. Ikigai in Japanese means your reason for being or your purpose in life. It is your sweet spot in your life. This is a combination of your personal, professional, and spiritual interests that comes together when you pursue the right Path in everything that you do and are happy about being on that Path. Finding your Ikigai is life’s work, often taking a lifetime to find. 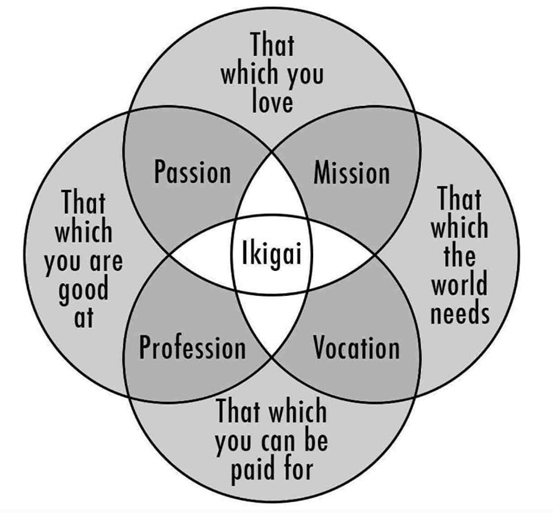 You would discover or uncover your Ikigai as you would engage in the chosen vocation, often through trial and error. Once you find your sweet spot the real work begins. Work in this space becomes an exploration and a joy, and in the process, you start getting in the Flow of it. As Malcolm Gladwell emphasizes in his book, Outliers, the culmination of these efforts to make a master in your craft requires at least 10,000 hours of diligent work sharply focused on your Path and then continuing on that Path with increasing sense of joy and engagement.