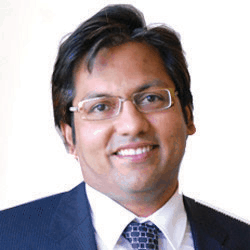 Mr. Vijay D Patil is an eminent educationist, seasoned leader and an avid patron of sports. He holds a Master of Business Administration from Bond University, Australia and a bachelor’s degree in Engineering.

In his capacity of being the President of DY Patil University, Navi Mumbai he guides the academic and institutional planning process and ensure the effective implementation and follow-up of the results of that process. He is committed to stimulate and deliver a student-centered nvironment leading to the highest levels of student engagement, services and success.

He has many stupendous successes to his credit. He was instrumental in establishment and commissioning of Padmashree Dr. DY Patil Hospital & Research Centre, a super specialty 900-bed charitable hospital from concept to commissioning.

His landmark achievement, the shining example of his vision and leadership is the establishment of the state of art Dr DY Patil International Sports Stadium at Nerul. The stadium has been rated as one of the 6 best stadiums in the world and has been honored with the ‘Best Stadium Experience’ award during the IPL Awards 2010.

He has been bestowed with many prestigious awards and accolades in appreciation of his selfless service to the cause of education and sports. He was given Maharastra Gaurav Award for his meritorious role in the field of sports. The Australian Government presented him with Alumni Excellence Commendation for Education in recognition of his academic achievements & professional pursuit. The Rotary Foundation awarded him with the Paul Harris fellowship, The Indian Dental Association bestowed upon him the Achievement Recognition Citation Honour Award. Indian Merchants Chamber has conferred on him the Jewel of Navi Mumbai award for his exemplarity leadership in building city of 21st Century.